My response to NCADA’s Executive Director, Howard Weissman’s post about critics of the National Council on Alcoholism and Drug Abuse based out of St. Louis, MO.  This post is regarding NCADA’s PSA with the #heroin which premiered locally during Super Bowl 50, yet was accessible nationally via the Internet and social media.

HERE IS THE PSA: Please watch first if you haven’t already:

Forgive my trespasses, but I stand by them. The 2016 Super Bowl marked 50 years of watching “cheerleaders” cheer on machoism and misogyny, 50 years of sexist commercials, and the fact that young girls are not encouraged to play football but instead do their hair, makeup, and cheer on the guys from junior high until the pros. I’m in Cleveland, not St. Louis, but despite that the Internet brought St. Louis’s NCADA and the “All American Girl” PSA for Heroin into my home.

Mr. Weissman, you label anyone with anything negative about the PSA a “critic,” as though criticism inherently is “wrong” and somehow a “bad” thing to do. You write “there is a small but extremely vocal group of individuals who have taken issue with it”… “It” being the PSA. Since when was a small minority “wrong,” when in the 1960s the Civil Rights movement was about a small minority who sat in the back of buses, who protested, who were told they didn’t matter because they were a minority? If a tampon commercial said I’d miss out on the Prom or swimming or a date with a “hottie” guy in hipster glasses then I would call out “sexism.” Maybe not as big of a deal to you, since you’ve lived decades without needing to use tampons. But I digress.

I don’t know how much NCADA spent on the commercial for the super bowl, but to say “All American Girl” and then show as an ONLY example a white, blonde with a healthy body- no offense, but she had thighs, a developed chest- hardly the image of a girl in the throes of heroin addiction… Where was I? Sorry, I was distracted by this image of a white, blonde girl described as losing her “looks” in a video that was only a guitar chord short of being heroin-chic back in 1993. (And no offense to cheerleaders, but the All American Girl can be multi-racial and listen to heavy metal and doesn’t have a smart phone or what looked to be an expensive car.)

#heroin: That doesn’t really imply for/against heroin, does it? As for the “critics” you called them “like minded folks” which as bad as saying “you people” in a racist connotation. This wasn’t about the “beauty of recovery” but it seemed to be about bringing the “beauties” to recovery. Your view and your repeated citing that the “majority” liked your ad indicates that the ones who previewed the PSA (what, 250 people screened it?) were also “like minded folks” possibly afraid of criticizing NCADA, and by extension, criticizing you. Hell, I’d be scared to criticize you, too. (Even though, ever so kindly, you wrote that critics “have a right to their opinion.) Funny, after saying critics could have their opinion, you dig into that “right” by saying critics “always believe they’re right and the best ones are very convincing.” I’m going to be clear here: You’re the one being the CRITIC of critics, if that’s possible, and at times your rebuttal is very convincing. You believe you are right, and I believe that you believe you are right. Good job, Howard!

Comparing those protesting the #heroin commercial to critics of the Wizard of Oz doesn’t make any sense. That film was “art,” and the NCADA commercial was supposedly “fact” and therefore, not an artistic statement but one that was supposed to raise awareness. What did Judy Garland’s role raise awareness for? Not to get hit by a window pane during a tornado? Maybe Oz was about finding courage, a heart, and a brain, but according to you, Howard, only people who PRIVATELY messaged you deserved a PUBLIC apology from you. Critics, however, are “angry viewers.” Yes, addiction can strike an “attractive” high school GIRL— but why should grown men call young girls “attractive”? That’s a bit pervy, in my opinion, girls shouldn’t be focused on their looks AND certainly grown men shouldn’t be focused on underage girls’ looks. But I guess underage sexual objectification sells? As you said: “for the vast majority of viewers, it worked.” Was your target audience child predators who sell heroin?

I’ve known heroin addicts, those who’ve died even, but I’ve never done heroin, and your commercial doesn’t dissuade me from contemplating how I might— I don’t have those blonde attractive looks to lose! Hell, I feel like I have nothing to lose because “looks” are not a priority to me as an American Woman. Your defense of the PSA “confounds me.” Yet, I laugh that you say “We at NCADA would completely agree that negative campaigns are ineffective and potentially harmful.”

I see that you deem critics as those who “seem not to care or don’t understand” which is just a backhanded way of telling us we are stupid and uncaring. Did you know that many of us critics have seen addicts die and seen rehab fail the addicts entrusted to the care of professionals and those “in the know” like NCADA? Maybe your campaign shouldn’t start with ridiculing critics, just a theory I have, and maybe your critics can be your biggest benefactors. I think it’s reckless to put down critics because their ideas might change the success of your campaign.

Because of the Internet, the “local” nature of your ad became national. I imagine NCADA is aware posting on the Internet reaches people globally? If NCADA doesn’t know about the Internet, how can I trust NCADA with helping addicts? Yet, after you say critics don’t understand, I’m glad (as an afterthought) you state, “we accept it was hurtful to some.” So if you need everyone’s best efforts, “everyone” should include critics. As for saying “ill-informed” describing the critics, then I suggest you get to know us better. We are advocates, activists, professionals, phDs, mothers, fathers, family, friends who have seen addiction destroy lives. How “ill-informed” can you be? Worse: Why are you trying to convince NCADA supporters that anyone who is a critic is “ill-informed”? Seems you want to write off any criticism fearing it might destroy NCADA’s mission. Maybe, NCADA needs to learn how to handle criticism better?

Real change won’t happen if NCADA and yourself, Howard, doesn’t accept criticism. Yet, again, thanks for your other putdown that we are a “tiny group of people with outsized opinions.” Perhaps you should look in the mirror? Was that a nice thing to say? Should you have said it? Was it necessary? On top of it, you credit NCADA’s “experience or intelligence” as a matter of placing NCADA as superior to the critics. What damages people is silencing their criticism, so nice try with that, at least you’re consistent with your dislike for vocal critics. At least, you are comfortable with being a critic of critics, which to me says you’re allowed to publicly criticize as long as those who disagree with you stay silent. But how are we supposed to “work together” if you are trying to silence critics?

The only adversary here is your anguish and immature backlash at criticism over your PSA. You are the one fighting, when you could have instead actively and emphatically listened to your critics. Here in Cleveland, I can read your words: “Critics can insult us on social media, but this ad will absolutely serve the greater good.” ABSOLUTELY you say? YOU can insult critics on social media, apparently, that’s ok? In the Cleveland area, I assure you that you can’t bullshit a bullshitter.

Forgive me my trespasses, but I stand by it.

“Anything that works against you can also work for you once you understand the Principle of Reverse.”
― Maya Angelou, I Know Why the Caged Bird Sings

To read the BEST criticism of NCADA’s PSA by Jeremey Galloway: http://makingnoiseinthesouth.com/index.php/2016/02/05/1651/ 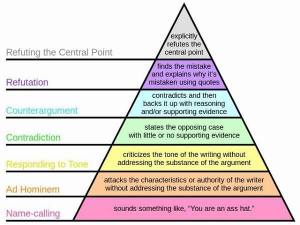